Santé International is on its way to creating the best and most high-tech fitness and sports hub in the Philippines that is seen to nurture world-class Filipino triathletes and other future local sports champions.

The executives from Santé International and Ayala Land pose for a photo after signing a landmark joint venture agreement to build Sante Fitness Lab @ Vermosa Sports Hub, the upcoming advanced fitness and training center in Cavite that will cater to the needs of Filipino triathletes and other sports enthusiasts. Santé International endorser Kim Atienza graces the signing ceremony held in Makati. 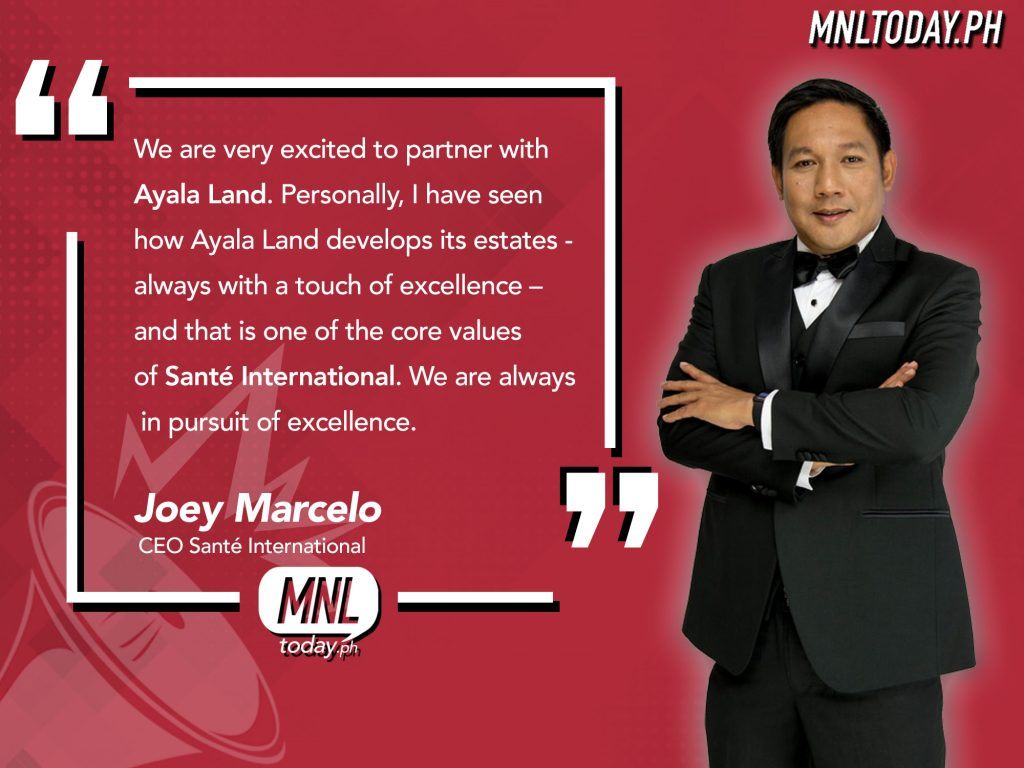 Under the agreement, Santé International will oversee the development and management of the Santé Fitness Lab.  According to Marcelo, who is himself a member of the Santé Barley Triteam, the joint venture is an opportunity to build a pioneering fitness facility specifically designed to cater to the needs of Filipino triathletes, those who are into competitive sports, and ordinary individuals pursuing a healthy and active lifestyle.

The center will also be fitted with top-notch amenities, including strength and conditioning fitness facility; sports rehab areas; a dance studio; a spinning class area; bike shop and services; a nutrition and fitness café; VO2 max/lactate testing; and conference and lecture rooms.

Kim Atienza, who has been a Santé International endorser for six years, described the latest partnership as “a perfect synergy” between two leading companies.

“Ayala Land has always been integrating fitness into all its developments. It is not only the usual fitness centers that you see [but theirs are] very progressive… everyday there are new trends [in this segment] and Ayala is like that, [it keeps up with the modern trends]. It is the same thing with Santé Barley. Pareho sila ng pananaw,”

Vermosa, which is bigger than Ayala Alabang, one of Ayala Land’s signature developments, is positioned as the modern suburban community master planned to promote healthy and active living. When Ayala Land acquired the property four years ago, the real estate developer had envisioned an “Ayala Alabang for the next generation.”

“We did some studies on rends to see where the market is going. There are two important trends that we have identified that would have an impact on how people live in the future. The first is that people are becoming more health conscious… I think this is the reason products such as Santé Barley is becoming more popular. The second finding is that people are spending more time and money to engage in physical activity, particularly sports,” shared Jay Teodoro, Estate Head for Vermosa/Ayala Land.

“One of the fastest growing sports right now is triathlon… There are a lot of people who are joining the triathlon race. Along with triathlon, running and cycling are the two emerging sports in the country. This is not only in the Philippines but it is a worldwide phenomenon. Those are the two findings that helped us design Vermosa. It caters to these new trends, with each component of the project promoting active and healthy living,”

Vermosa’s Sports Hub boasts of Olympic-size pool, oval track, and a sports science laboratory. It is being positioned as a complete, one-stop training and lifestyle destination for triathletes and all sports enthusiasts.

Santé International is one of the fastest growing global providers of organic health and wellness products and services.  Through its latest collaboration with Ayala Land, Santé International demonstrates its full commitment to offer a holistic approach to healthy living.

Why Crossfit? Let us count the ways

Is your immune system healthy enough amid the...

Dry Season is Here! Why should you stay...